Submitted by Shaker Financial Services, LLC on May 4th, 2017

Markets, both domestically and globally, have risen in steady fashion since the November Election.  Many have attributed the rise in U.S. markets to expectations of positive, pro-business policy changes, something we’ve dubbed the Trump Trilogy (deregulation, tax reform and infrastructure spending).  We entered April near all-time highs which has led many to question whether we’ve come too far, too fast and are susceptible to disappointment if the pro-business agenda fails to materialize as promised.  In March, we did indeed witness a small decline after an effort to repeal Obamacare failed.  Many began to question this administration’s ability to succeed in implementing its other policies.

We’ve been discussing a Fundamentals Plus perspective of the current environment in our writings.  While April was a relatively quiet month on the Political Front (we all need a bit of a break from that narrative), it was the heart of Earnings Season which took center stage.

In general, any earnings season focuses the attention of investors squarely on individual company’s performance and allows them to judge whether today’s prices are justified based on earnings.  Essentially, these reports provide investors with clues as to whether recent strength in economic reports, both domestically and abroad, are filtering down to corporations.  With 75% of S&P 500 company reports out as of this writing, the conclusion seems to be that current levels are indeed justified (one estimate was for a 11.8% rise in earnings).  The combination of generally strong Q1 reports, positive forward guidance and upward revisions to estimates has bolstered confidence among market participants.  Based upon these factors, markets moved from slightly lower mid-month to finishing up about 1% for April.

Moving forward, we will continue to monitor economic reports, earnings reports and international elections.  Of course, we’ll also be watching Washington to see how things progress on the Trump Trilogy.

In the month of April, CEFs continued their strong yearly performance with a rather strong month, both on net asset value (NAV) and discount movements.

On the NAV side of things, CEFs performed in April a bit better than markets in general.  As shown in the table below, equity CEFs posted gains of about 1.5% on average, as compared to the approximate 1% of the S&P.  This was a welcome result as there have been periods recently in which CEFs lagged the markets on upswings.   Further, as interest rates retreated below the range they had been stuck in for most of the year, CEF bond funds were also able to post some nice gains of about 1% on average as well.

As for discounts, the trend of general narrowing of CEF discounts in 2017 has continued.  As shown in the graph below, both equity and bond CEFs steadily narrowed throughout the month, finishing up at their narrowest levels of the past twelve months.  Both equity and bond funds ultimately narrowed more than a full discount point on average over the month.

Moving into May, we will be watching to see if discounts can sustain and/or possibly add to this strength.  While these discount levels may seem narrow on a short-term basis, current discount levels of CEFs still remain generally wider than where they sat back in 2013 before the “taper tantrum” widenings which occurred in the latter part of that year.  Whether CEFs will continue to benefit from the current sanguine nature of the marketplace will be something all CEF investors will be contemplating.  The ability of interest rates to move in an orderly manner moving forward may very well be the determining factor in this regard. 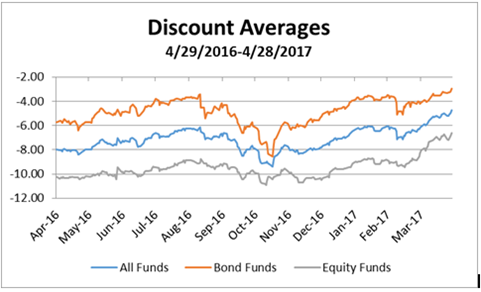