MARKET SUMMARY: Consolidation (or a whole lot of nothin’)

To follow up on last month’s report, entitled “Breakout”, we felt the most appropriate theme, given the extremely tight range this month, was a consolidation of past months’ gains. In August, we observed a market that, for lack of a better term, was boring. The S&P stayed in a tight range all month, never closing more than a percent from July’s closing level. Intraday volatility was nonexistent. In fact, through the end of August, we’ve now had 38 straight days where the market has moved less than 1% on a closing basis.

At SFS, we believe that consolidation periods (especially after strong moves higher) are generally speaking a healthy thing for markets. First, calm periods allow individual stocks to work out their own sustainable level, without artificial forces pushing them one direction or the other based upon large market sentiment swings. Second, investors can use such periods to effectuate sector rotations without dramatically impacting the markets as a whole. While we don’t believe that consolidation periods necessarily indicate a positive (or negative) directionality in the near-term, we do believe that it allows funds to establish rational valuations that can assist market participants moving forward.

Looking into September, perhaps volume picks up now that traders will be returning from the Hamptons after what has been a calm, but positive summer for all. In a period in which there are few established catalysts for the markets to key in on, we believe that the most likely mover of the market will be the Federal Reserve’s decision to raise rates (or leave them steady) later in the month.

With regards to the Fed, there are still two basic camps: 1) a rise in rates will damage the markets and 2) a rise will have little to no effect. Either way, until a rate rise does occur, it will hang over the markets. As we have discussed previously, we are in the second camp and believe that a Fed decision to raise rates based upon a determination that the US economy is strong may very well be a positive catalyst for the markets. How market participants react and deal with the Federal Reserve’s September actions or commentaries will ultimately determine the movement of the markets.

The general lull in the markets discussed above also factored into the discount movements in CEFs. The effects however, were different with respect to equity and bond funds.

As for equity funds, we wrote last month, “[w]hether equity funds can maintain their recent narrowing trajectory, is, in our minds, the most interesting question facing CEFs for August.” The calm nature of the markets led to a nurturing environment in which equity funds could continue their narrowing. Potentially most promising was the smooth and steady nature of the narrowing (see graph below). Although equity funds still have not recovered the levels that they traded at prior to the Mid-2015 fall off, they have crept back more than one discount point, approximately half of the prior loss.

On the other hand, bond fund discounts, much like the market as a whole, spent the month in a consolidation period. No significant narrowings or widenings occurred as bond CEFs traded at rather stable levels throughout the month. Such a period, in which no real sentiment swings in the markets occur, allows underlying bond pricings to adjust back to more rational levels.

As we have discussed over the past few years, during several periods of extreme volatility, we have witnessed dislocations in bond pricings stemming from heavy selling pressures. We believe that in the absence of these pressures, bond prices will move higher as they seek their equilibrium level. As shown in the table above, we saw bond funds had strong NAV returns in August, gaining more than one percent. With NAVS strong and discounts stable, bond funds provide the steady, non-market correlated returns we are looking for. Additionally, and importantly, the current environment provides a tremendous opportunity for further enhancing gains through discount capture.Moving into September, the fundamental question facing CEFs is how they will react to either Fed action or inaction. If the markets can maintain stability in the face of Federal Reserve speculation, the general upward trajectory of CEFs could continue through the end of the quarter 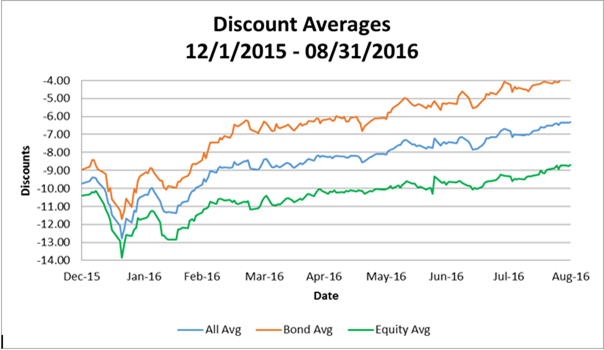