For the month, we witnessed steady and positive performance across the board. Although stalling shy of the mystical 20,000 level on the Dow Jones Industrial Average, markets calmly climbed for most of the month and finished up just under 2% for the month.

During December, we also saw a continuation in positive economic data reports. Adding to this, investors found reasons to believe this upward trend in markets would continue throughout 2017, as they welcomed the New Year with anticipation of fiscal stimulus, deregulation, and a general sense of a “pro-business” environment resulting from a Republican controlled government.

The final week of December brought a slight pause to the upward creep of the markets, as “rebalancing” dominated trading in a low volume environment. (Please see the footnote at the end of this report for details on how this rebalancing played out in markets which we previously sent out as part of a daily report.) In short, the effect of this rebalancing towards the end of 2016 led to selling pressures on equities and buying pressures on bonds. This is indeed what we witnessed in the last trading days of the year.

All in all, a positive month for the markets, and they ended the month and the year just shy of all-time highs on most major indices. Throughout all the drama of 2016 (including Brexit and Trump election), the US economy continued its steady modest growth and continued its march to full employment. (Some commentators would say that we are already there.) And as we have always maintained, the direction of the US economy is the most reliable indicator of the US markets.

In the world of CEFs, December traditionally marks a period of slow and steady widening in discounts due to tax loss selling pressures. However, as we have witnessed all year, 2016 was not a traditional year. In December, the combination of heavy selling in November (pre-election) and the rebalancing flow from equities into bond funds discussed above, led to some disparate effects in CEFs.

On the Equity side, selling pressures for the most part followed the general pattern. Throughout December, equity fund discounts dripped downward. In the final days of the month, as selling pressures eased, discounts began narrowing a bit. This is the movement of discounts we would expect followed by continued narrowing in the New Year as part of what has been dubbed “The January Effect”.

However, on the Bond side, things were a bit different. In fact, while not particularly dramatic, bond funds steadily narrowed throughout the month.

As we discussed last month, the spike in interest rates following the election of Trump, led to some extensive selling in bond funds. Accordingly, as shown in the discount graph below, bond funds entered the month of December at discount levels that were a bit lower than where they had settled in prior to the election. Because of this, the general narrowing momentum from the last week of November continued into December.

But potentially more impactful in December was the strength of bond funds throughout calendar year 2016. As shown in the table above, the average bond CEF gained mover than 12% in regards to their net asset value for the year. Further, the average bond fund also experienced a narrowing (or “tailwind”) of an additional 3%. When both these factors are taken into account, bond funds had a very strong year. As we found here in our tax-loss selling efforts, it was quite hard to find a bond fund which actually had losses. Accordingly, there were limited selling pressures on bond funds in December and the average fund actually narrowed a bit more than a full discount point. 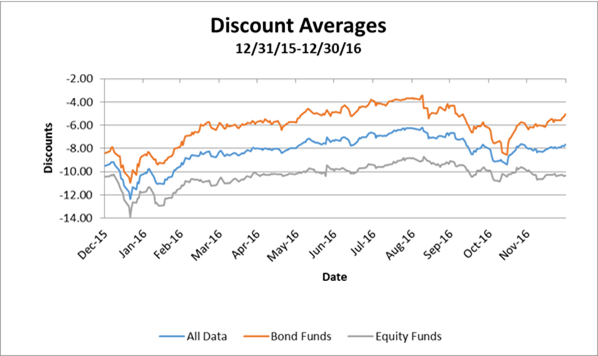 In order to understand “rebalancing” fully, we must take a step back and review the general movements of the markets subsequent to the election. While there has been a myriad of sector rotation effects, the main outcome for this discussion is that equities (stocks) have gone up while bonds have posted modest losses (in light of the earlier spike in interest rates).

So imagine an investor passively managing money through the use of something like mutual funds with a mandate of a 60% equity and 40% bond blend. And for this example, we will presume that the investor was perfectly aligned going into the election. Now, imagine that after the election the equity portion rises 6% while the bond portion falls 2%. This investor’s portfolio has still gained about 3%, but because of its passive management style, it now sits at 62% equity and 38% bonds. With the end of year statements coming up, it now becomes incumbent upon the investor to “Rebalance” and therefore sell some equites and replace them with additional bond purchases.

This necessary rebalancing faced not only certain investors but large pension funds as well. The outcome of this rebalancing was negative for equities (excessive selling pressures) and positive for bonds (extra buying pressures). Some commentators have stated that the cumulative amount of equity selling based upon rebalancing alone may have reached more than $50 billion.