Following up on January’s strong performance, markets continued their ascent in February, tacking on another 4% for the month and closing just off of all-time highs.  The most noteworthy aspect of this most recent advance is its unspectacular “slow and steady” nature.  We’ve noted numerous times in our end of day reports the current streak of days without a 1% intraday move in the S&P 500, which now stands at 49.   How quiet has it been in the markets?  Consider that the median daily move in S&P for the month was 10 bps.  The worst day of the month saw us down 21 bps.  Slow and steady indeed.

This stable, positive trajectory for markets does seem appropriate under the “fundamentals plus DC” analysis we have been positing as of late.  On the fundamentals front, earnings season was solid and economic numbers have been mostly trending positively, culminating this week with the highest consumer confidence number in over fifteen years.  On the DC front, the first prong of the Trump Trilogy (deregulation) was put into place.  As for the other two (tax relief and infrastructure spending), investors appear to have remained cautiously optimistic about their eventual implementation.

The absence of volatility within the context of a rising market is most welcome.   While some talking heads question the sustainability of this environment, we will simply continue to enjoy it while taking advantage of opportunities in our closed end fund universe.  There have been many naysayers throughout this entire move up, yet one prominent investor, Warren Buffet, appeared on CNBC this week and opined that the market was actually on the cheap side.  However, we feel that the most important and most interesting aspect from Buffet’s interview was his statement that he didn’t know anyone who can time markets.  We couldn’t agree more, Mr. Buffet.

In the early part of February, CEF discounts continued the general narrowing momentum from last month’s January Effect.  After a bit of a dip in the middle of the month, discounts bounced back to finish the month with some positive momentum.  All in all, like the markets in general, CEF discounts had a quiet and generally positive month 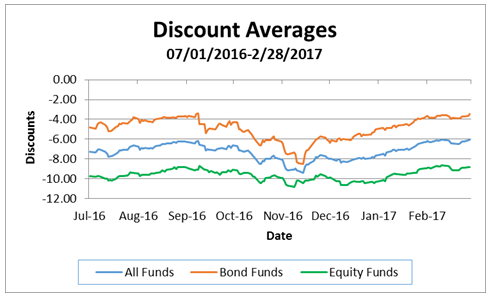 Moving into March, we believe the most likely catalyst for discount directionality will be the potential rate rise by the Federal Reserve during their March meeting.  Currently, futures markets indicate a belief by the markets that a rate rise is slightly more likely than not.  As we have repeatedly discussed over the past several years, fears of a rapidly rising rate environment has often led to dislocations in the bond markets and heavy selling pressures on bond CEFs.  More recently, however, markets and CEFs have been a bit more sanguine about Fed action.

How the markets react to any future Fed rate rises will be a critical aspect of near term returns, as well as any potential CEF discount narrowings or widenings.  We believe that a central basis for any reaction is how the markets view the Fed’s rationale for a rate rise.  In this regard, we believe the question investors will most likely be asking can be stated this way:  “Is the Fed raising rates for the right reason?”  As we have referred to in prior commentaries, if the Fed is seen to be raising rates based upon a view of general strength in the labor markets and economy in general, markets may very well take this decision in stride.