For the early part of June, it looked like markets were getting their wish for a lack of drama and
surprise. In fact, markets were quite calm and traded in a tight range, not straying too far from
May’s closing levels. Then came the Brexit vote on June 23rd. Up until the very end, it appeared
as if Bremain would prevail, but alas, this is 2016, and conventional wisdom is not quite as
reliable as it once was (consider the fact that nobody could have imagined, except perhaps the
candidate himself, that Donald Trump would advance this far in the Presidential race).
So in an unlikely turn of events, the British actually voted to exit the European Union. While
this had an immediate impact upon global markets, the reassuring aspect of the declines was that
Brexit was an event and not a trend. Or put another way, the new expectation that the UK had a
greater likelihood of heading into a recession in the coming years needed to be priced into the
markets, but just once. So how much was the pricing? Initially, quite large. In a rough 2 day
period, the market lost over 5%. However, as markets took a pause and fully evaluated the
potential impacts, investors “Brelaxed” and markets recovered almost all of the losses in the last
3 days of June. In the end, markets remained within 1% of May’s closing levels, despite the
drama from the Brexit vote.

As an aside, England’s National Soccer Team lost 2-1 to Iceland several days after the vote,
eliminating them from the 2016 UEFA Soccer Tournament in what some jokingly called “a
second Brexit.” Iceland has a population of only 385,000. England’s population is almost 54
million. It has been noted that almost 10% of Iceland’s entire population was actually at the
stadium to witness the upset.

Moving into July, we still await an impetus that can break markets out of the trading range they
have been in since March. While many eyes will be focused on the July jobs report and its
impact on a potential Fed rate rise in June, conventional wisdom has the Fed on pause until
September in light of the Brexit vote. Our focus remains on the amount of cash we believe to
still be on the sidelines. Even prior to the Brexit madness, cash levels were historically high not
only in individual investor’s allocations, but within mutual funds as well (5.7% of mutual funds
in cash was highest since 2001). As markets are, at a basic level, simply a matter of supply and
demand, we believe that some calm times could very well lead to increased investments across
the board. This would, in turn, raise prices in both equity and bond sectors.

As we have discussed on occasion, the most difficult part of CEF investing is navigating periods of across the board widenings in all funds or just in certain sectors. We sometime refer to these as “carnage” periods. These widenings occur when sellers far outnumber buyers thereby pushing prices well below what most would consider the “fair value” or the “historical discount” of funds. The most typical catalysts for such widenings are 1) prolonged fear-based selling periods and 2) large levels of forced liquidations.

After a steady month in May for CEF discounts, June provided a potentially negative event for CEFs, the infamous Brexit vote. The most illustrative way to discuss the Brexit effects on CEFs is to observe the statistics for the first three days:

Day 1: The first day was marked by the massive global selloff following the official results of the vote. Despite the fact that massive declines were being posted in world markets, the selling was actually quite orderly. No excessive selling momentum presented during the day. Additionally, since the markets had been up quite nicely the week before, no forced liquidations were present. Accordingly, CEFs did not suffer from widening pressures and, in fact, equity funds held steady and actually narrowed somewhat.

Day 2: The second day post-Brexit was not so kind to CEFs. As short-term fears of the ramifications of a Brexit intensified, fear-based selling increased. Additionally, as the markets had suffered such large losses on the prior day, those who were caught on the wrong side of the Brexit bet found themselves with margin calls or other reasons for forced liquidations. With both of the above-referenced widening pressures present, CEFs underperformed. The result was an across the board widening of about a half of a percent.

Day 3: “Turnaround Tuesday” welcomed an abrupt end of selling pressures as opportunistic buyers swooped in to purchase positions that had been oversold in the prior two days. Brexit fears abated and there were sufficient buying pressures to alleviate the residual forced liquidations. Accordingly, markets and CEFs posted significant gains, which continued throughout the end of June.

All in all, the Brexit selloff came and went without much effect to CEF discounts. While this period did remind us of the potential difficulties involved in CEF investing, it also somewhat confirmed the current stability of the CEF landscape we discussed in last month’s commentary. If CEFs continue to demonstrate the ability to withstand temporal periods of selling pressures, this will be a significant benefit to CEF investors moving forward into a period in which some defined uncertainties (Fed Rate Rises and the general election) will be present. 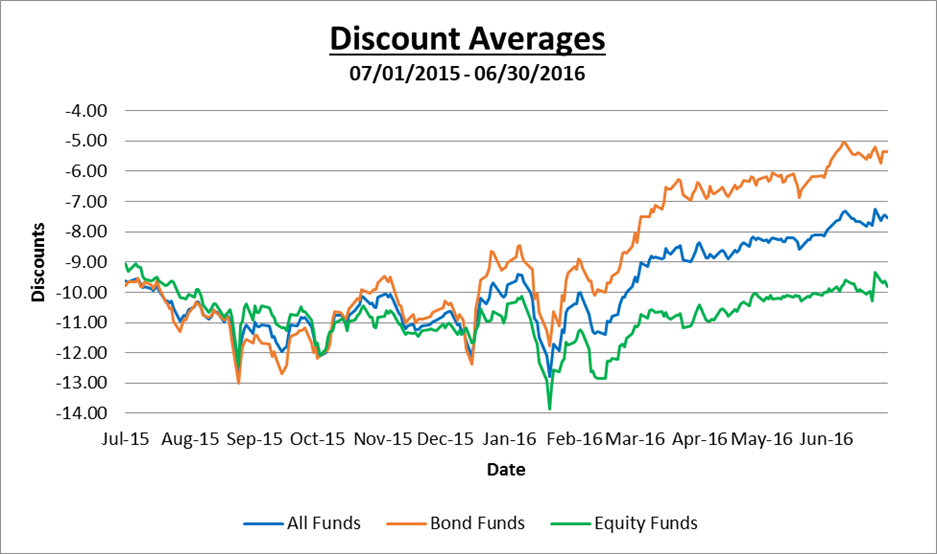