One of the lessons we’ve learned in 2016 is to expect the unexpected. There have been numerous terrible predictions by folks getting paid a heck of a lot of money to tell us what’s most likely to happen, only to be proven wrong in the end.

So, what transpired in November? The long-shot Republican Candidate won the Presidency, in a Brexit-like, last minute unexpected result. Interest rates, which had been slightly trending upwards prior to election night, soared from 1.7% to 2.4% post-election in a manner not unlike the Taper Tantrum of 2013. From all appearances, it would seem that the long awaited and often anticipated Fed rate hike would finally become a reality in December. And the dollar rallied strongly.

How did markets react to all of these events? Not unexpectedly, several bond groups suffered losses as rates rose so quickly and precipitously, similar to 2013. However, rationality seemed to return to the bond market as groups such as high-yield, multi-sector and reset loans were among the least affected groups. This is a big change from the 2013 Taper Tantrum, when just about all bond funds suffered losses in a baby with the bath water type environment.

Equities reacted in an uneven manner as a violent post-Trump Victory Rotation took place. Domestic equities, especially small caps, fared quite well for the month, while interest rate sensitive sectors, such as utilities and REITs suffered losses. Emerging market equities reacted negatively to the strength in the dollar.

We see our job at SFS not as predictors or prognosticators of events/risks, but rather as managers of risks and potential outcomes. We monitor markets vigilantly on a daily basis and constantly assess what’s in front of us, using that feedback to guide us in our decisions. Going forward, we will continue to look for the best opportunities and manage ever-present market risks.

In the end, many markets and sectors finished the month at all-time highs. At SFS, we firmly believe that any market is, first and foremost, a reflection of the economy in which its participants operate. In this regard, the US market components are part of the US economy. For the past few years, the US economy has experienced a basically uninterrupted period of modest growth. While many believe that the US economy could or should have grown faster, it has nevertheless grown. As we have discussed recently in other commentaries, fundamental dynamics such as employment, earnings results and GDP prints have all confirmed the steady, if unspectacular, growth in the economy. November was no different, as the vast majority of data reported throughout the month exceeded expectations and continued to reflect an expansionary US economy. In this setting, it is quite reasonable that markets have moderately climbed to all-time highs.

As we have discussed during the past few months’ commentaries, while CEF discounts tend to remain stable over time, discounts as a whole can skew to one direction or the other. When discounts all fall together (usually due to large selling pressures) we call this a “generic widening.” As this has a negative effect on your account holdings, we sometimes also refer to it as a “headwind.” When discounts move up, we call this a “generic narrowing” and since it is positive for your accounts, we call it a “tailwind.”

A word that almost always accompanies our commentaries in this regard is “temporal”, as we believe that any generic movement in discounts will be reversed as the factors that have caused the movement dissipate. November’s discount action provides a textbook example of this concept. 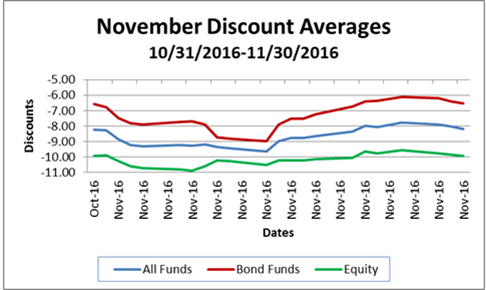 As shown in the chart above, discounts generically widened in the first half of the month. While part of this was due to a general outflow of investments leading up to the election, one can see that the widening continued immediately after the election. This was presumably due to the dramatic spike in interest rates following the Trump victory. While not as precipitous as the Taper Tantrum, this did lead to another period of outflows, especially in bond and fixed income funds.

But alas, as these pressures resolved themselves and investors returned to the marketplace, discounts recovered. In fact, in the end, both bond and equity funds pretty much finished up the month where they started. And accordingly, the early month widening effect was “temporal” and resolved itself within the next couple of weeks.

Moving into December, we typically anticipate another temporal widening due to tax loss selling. Generally speaking, each December we see a bit of widening in discounts as sellers outnumber buyers for the first three weeks of the month, as investors take advantage of the tax consequences associated with selling any position with a current loss (something we also do here for any clients with a taxable account). Once the selling is complete (usually just after Christmas but definitely on December 31st), that pressure subsides and discounts tend to narrow as part of a phenomena known as the January effect.

Each tax loss season is somewhat unique in its effect and magnitude, as many factors contribute to the volume of sales needed and/or available. As it appears so many investors have already sold out of positions throughout this year’s turbulence, and as we are currently trading near or at all-time highs, our general belief is that we will have a milder than usual tax loss season. 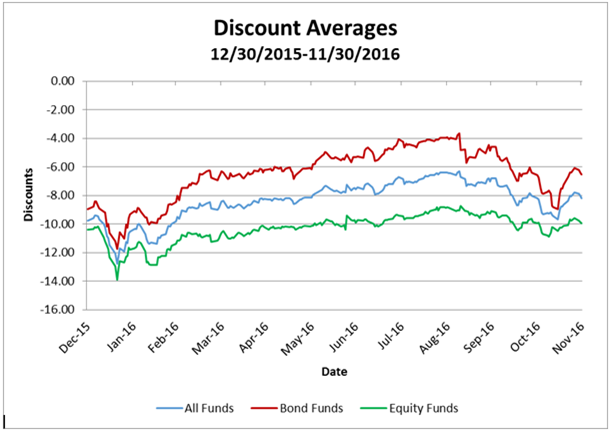