While recent economic reports and corporate earnings results seem to point to a stable, improving environment both domestically and globally, the overhang of political uncertainty, namely the 2016 Presidential Election, has created an uncertain environment which led investors to keep their hands in their pockets during the month of October. This dichotomy led to a strange month in which markets saw both patches of optimistic buying and pessimistic selling. The cumulative result leading to declines in the overall markets of about one and half percent.

On the economic front, earnings came in for the most part better than expected. By numerous measures, earnings were the best in a couple of years and could lead to an end of what has been dubbed an “earnings recession.” At SFS, we believe in the fundamental belief that markets are, at their most basic level, a reflection of the companies of which they are comprised and, accordingly, increased earnings should translate into better market environments. With regards to fundamental data points during the month, most were in line or better than expected and further confirmed the basic trend line of a growing (albeit modestly) US economy. This was capped off with a GDP report of 2.9% growth near month’s end.

On the other side of things, the impending election had a rather significant dampening effect on investor confidence. As we have stated all too often, markets hate uncertainty and October brought us a lot of it. (As a reminder, we believe that the markets are looking for a Clinton victory and Republican hold of the House). In the middle of October, concerns over a Democratic sweep of both the executive and legislative branches led to questions of what impact that would have on fiscal, regulatory and tax policies. Then, towards month end, a release of further investigations by the FBI led to concerns of a Trump victory. During each of these periods, investors suffering from election anxieties appear to have sold out of the markets, apparently awaiting the results of the election to redeploy their capital. This has led to a somewhat historic level of cash on the sidelines (investors holding levels of cash similar to the amounts during 9/11 and Brexit). As markets move at times simply on basic principles of supply and demand, the movement of investors into cash (even on just a temporal basis) leads to softening of market levels.
We are one week away from gaining further clarity on who will be our 45th President. Once the election is over, we would expect market participants to once again focus on the economy and corporate results. Of course, there will be the continued obsession with the Fed (specifically the Fed rate decision in December) and the path of interest rates going forward. While it is becoming ever clearer that the path will be up due to steady if not spectacular progress, it is the pace of rate increases which the market will ultimately try to decipher. 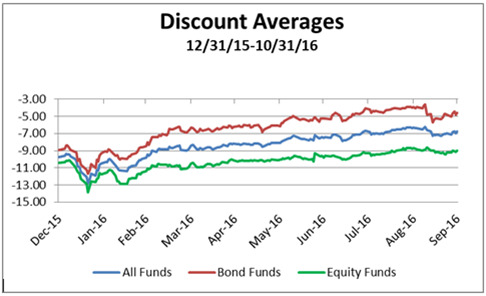 As we discussed in detail in last month’s commentary, CEFs can suffer from across the board widenings during periods of excessive selling pressures. Put simply, during these time frames sellers outnumber buyers and prices decline artificially. Last month, we discussed how this typically occurs, when there is 1) fear based selling and/or 2) forced liquidations. In these cases, the seller/buyer imbalance is caused by an increase in selling pressures.

But there is another way the imbalance can be created and that is when there is a temporal decrease in buying pressures. This is what we believe occurred in October. As discussed above in the market commentary, election anxiety led investors to maintain historic levels of cash, thereby depressing buying demand. This, in turn, pushed CEFs lower than their NAV movements would suggest.

For the month of October, the depressed level of buying pressures led to widenings in both equity and bond funds. As shown in the table below, equity funds widened out about 0.8 discount points, leaving just about one half of a discount point as their YTD gain. As for bond funds, the widening was a bit more exaggerated, as they lost about 2 discount points on average. As bond fund NAVs were positive in many sectors, the effect of the widening was a bit offset, yet it still created a rather strong headwind for price movements.

Moving into November, the most fundamental question for CEF investors is when typical buying pressures will return. While there is never truly a time in the marketplace in which no downside concerns exist, the removal of election anxiety could certainly lead to a period of reinvestment of cash positions.