Submitted by Shaker Financial Services, LLC on October 7th, 2016
Then, we experienced a bit of volatility and slight expansion of the extremely tight range which has persisted since mid-July. In the end, we closed positive, yet little changed for the month of September. Too early to tell, but in hindsight, the selling which occurred after the Labor Day may come to be referred to as the Back to School Sale of 2016.
What caused the selloff from all-time highs? There are two apparent reasons/excuses.
First, there was a brief scare when Boston Fed Chief Rosengren (a voting member) made public statements in support of raising rates in September. While the Fed noted that the economy was improving and on a solid path, they ultimately decided to leave interest rates steady at their September meeting.
Second, markets hate uncertainty and earlier in the month (pre-debate) we had a dead-heat in the Presidential election. A Trump Presidency clearly creates more uncertainty and markets are aware of that fact. After the Presidential Debate, Hillary Clinton gained in the polls and markets reacted positively. As an aside, if you want the truest barometer of who’s winning the election, look no further than the Mexican Peso. It rallied sharply after the debate and has continued steadily higher since.
Moving forward, we do not find a compelling or obvious short-term catalyst which would move us out of our current range as the Fed does not meet in October and voters go to the polls to vote for President in early November.

For the most part, 2016 has been pretty kind to CEF discounts. As shown in the graph below, after a brief decline to start the year, discounts have steadily narrowed throughout the year. However, in the middle of September, markets yet again had a bit of a panic concerning the possibility of Fed rate rise and Bond CEFs experienced a short term widening, or what we call a “carnage period”. 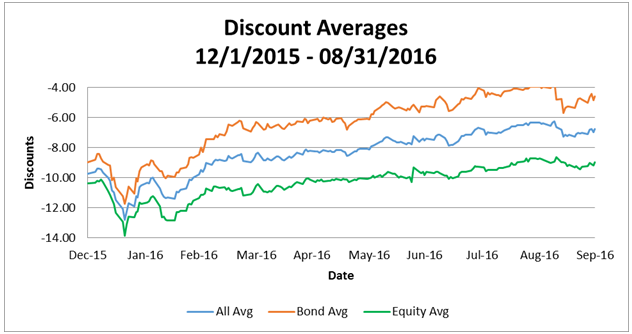 So what is a carnage period? In its most generalized sense, a carnage period is a time in which discounts drastically widen over a short term period. While these declines are typically temporal in nature, they can create a short-term dislocation in prices in CEFs. Below, we will discuss the causes and stages of any carnage period and then walk through how this manifested itself in September.

1) Excessive selling (the widening): Carnage periods start with a period of excessive selling pressures. Typically, there are two predominant causes: 1) fear based selling and 2) forced liquidations. While the initial selling usually begins with fear, the need liquidation selling is many times more dramatic in nature.

Here is a simplified description of how it occurs. Fear based selling leads to large declines in the overall markets. These declines lead to investors being forced to sell, for reasons such as margin calls. And here is the key part, investors forced to sell wind up creating a scenario in which there are more sellers than buyers and this forces prices below their rational level, therefore causing widenings of discounts across the board.

2) The cessation of selling and consolidation: For the widenings to cease, the selling pressures must ease. It is usually not mandatory for the original cause of the fear based selling to fully dissipate. What is required is the ending of the liquidation sales and/or the excessive nature of any repositioning. Once this occurs, discounts stabilize.

3) The bounce back (the narrowing): Once the selling pressures end, opportunistic investors (like us) come in to swoop up the bargains and discounts narrow back.

So what occurred in September? The carnage period (Stage 1) began on September 9, when Boston Fed Chief Rosengren made statements in support of raising rates. This caused a dramatic selloff in overall markets and they ultimately finished the day down close to 2.5%. Excessive selling pressures occurred in both Equities and Bond funds. In fact, there was actually more pressure on bond funds because they were not down as much as their equity funds (and that’s because they are not actually down as much NAV wise). Through the excessive selling, bond CEFs widen. 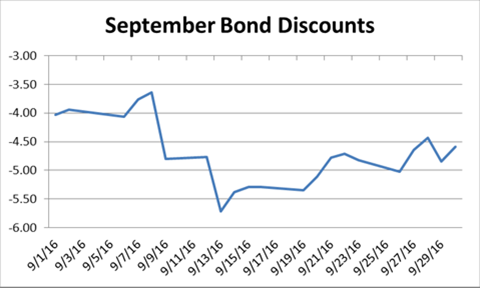 To better explain this, let us use a quick example. On a day in which the markets are down 2.5%, a typical equity fund’s NAV will accordingly be down 2.5%. However, a bond fund’s NAV might only be down 0.5%. We find that during these periods, when push comes to shove, undisciplined investors will actually sell the bond fund down 1.5% in lieu of selling the equity fund down the 2.5%, simply because the nominal loss is less. In this scenario, the discount of the equity fund remains stable, while the bond fund actually widens 1 discount point.

As shown in the chart above, the selling pressures from September 9 through September 13 caused bond discounts to widen in excess of 2 discount points. Once the dust had settled and investors took a breath, and when all margin calls had been resolved, markets stabilized and we entered the cessation stage of the carnage period (September 15 –September 20).

Toward the end of the month, we began to see the bounce back in bond funds (stage 3). As bond funds had been sold off, the discount levels presented nice entry points for investors who gradually pushed discounts back to levels closer to their pre-carnage levels.

All in all, we are always a bit reassured when we see discounts recover from carnage periods. When they do, we believe they further establish the overall discount level upon which they are trading. When discounts have had the type of narrowing they have had throughout 2016, such a confirmation is promising sign for further holding of these levels.